I had a kid who needed a bath robe and a fabric shower curtain that I no longer used. What to do? Of course, I up-cycled.

A shower curtain or piece of fabric.

Because I was using a shower curtain, I first had to cut off the top rings. I also cut off the bottom hem because it was very thick.

Lay curtain out and fold in half lengthwise. Measure half-way up on folded side.

Cut along the fold from the bottom to the previously measured half-way point. 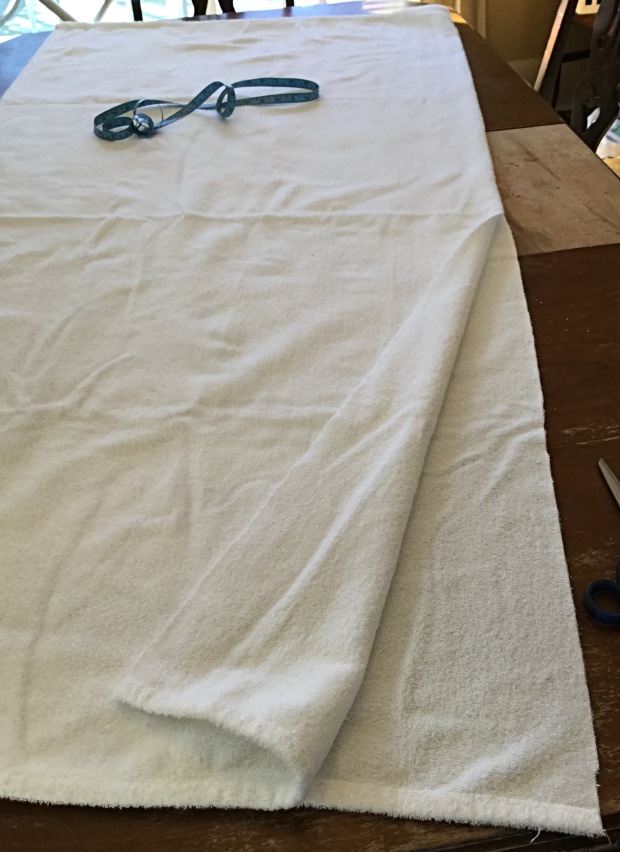 Fold the curtain down from the middle and pin the sides (which are opposite to the folded side). Leave space for your arms to come through. I left 10″(i.e. 10″ folded for a total opening of 20″).

Sew trim around the open front seam. You could make or buy bias tape, but I chose to use a knit scrap fabric that I had lying around. I simply folded a 2″ strip in half and sewed it on with a zigzag stitch. I then trimmed off the excess trim.

I also added trim around the arm holes.

Although you could complete the project here, I decided to add a loop to hang the robe. I simply made a tube out of the trim fabric, and sewed it at the nape of the neck with some reinforced zigzag stitching.