March Break is almost here, so I dug into the archives to find some fun things to do with the kids! Next week  we’ll return with new projects.

– milk (the more fat the better – homo would work great!)

1. Pour some milk into a bowl and put a drop each of about 4 different food colours. 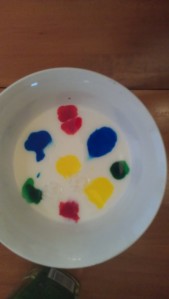 2. Squeeze a drop or two of dish detergent into the bowl. 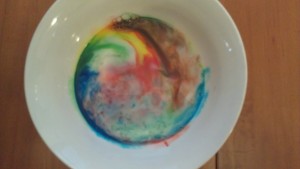 Milk contains lots of fat and proteins. Dish soap, because of its bipolar characteristics, weakens the chemical bonds that hold the fat and proteins in the milk. The soap’s hydrophilic, water-loving end dissolves in water, and its hydrophobic, water-fearing end attaches to a fat globule in the milk. The soap molecules then race around to join up with the fat molecules. Once they catch up and become evenly mixed, the action slows down and stop.

By the way, I haven’t become a scientist in my spare time. I discovered all this sciency stuff on stevespanglerscience.com.

1. Pour the vinegar, then the salt into the bowl and stir it up.

2. Put a few pennies into the bowl and slowly count to 20.

3. Take out the pennies and rinse them with water and check out how shiny they are!

4. Put a few more pennies into the bowl, counting to 20, then remove them and leave them on a paper towel.

5. When they are dry, you’ll notice green spots on them.

6. Take a couple of screws and throw them in the bowl with a few more tarnished pennies.

7. After you count to 20 and take them out, set them on a paper towel to dry. You’ll notice that they have darkened and perhaps even turned coppery. 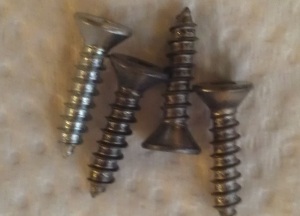 Vinegar is an acid, which reacts with the salt to remove copper oxide (what was making your pennies dull). The second set of pennies turned greenish because a chemical called malachite formed on them. And the screws pick up the copper that has settled in the vinegar and been removed from the pennies.

1. Cut the end of a straw off to a point and flatten the end.

2. With your lips covering your teeth, put the straw in your mouth and blow! An awesome squawk will issue forth. 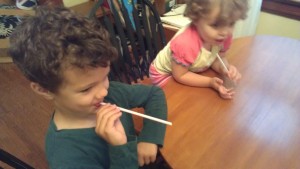 The triangular end of the straw that you cut forces the two pieces of the point to vibrate very quickly against each other when you blow through the straw. The vibrations from your breath creates the funny noise.

2. Add a couple of drops of food colouring, for effect.

3. Slowly pour the vegetable oil into the glass.

4. Sprinkle the salt on top of the oil.

5. Watch blobs of “lava” move up and down in the glass.

Because the oil is lighter than water, it floats on top. Salt is heavier than oil, so it sinks down into the water and takes some oil with it, but when the salt dissolves, up goes the oil.

Thanks to Science Bob, I have dazzled my kids and neighbour children with these last cool experiments.

I think I’ve created some enthusiasm for school next week! Now if they could just funnel some of that enthusiasm into making their lunch…

Tags: DIY, Do it yourself, Easy, Experiments, Kids
From: Kids' Fun
← “Dinosaur Eggs” | Kid’s Loot Bags
Bulletin Board →
No comments yet